This past Sunday in church every parishioner was handed two poker chips. Do not fret, my friends—we are not running a gambling ring in the Fellowship Hall. Each parishioner was given a white chip and a red or blue chip for a straw poll. Six jars were set out in the Fellowship Hall and people were invited to place their chips in six jars. The jars were labeled: Tradition, Social Justice, Daily Practices, Historical Context, Personal Practices, and Theology.

The poll ended up as follows: 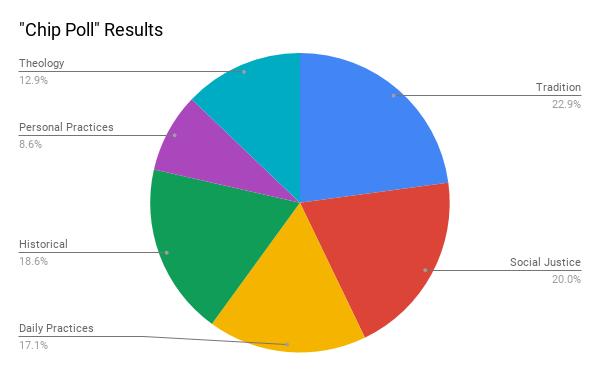 What was fascinating about the poll was that there were a ton of “white chip” requests for information on tradition. In the case of this poll tradition was described as: “Where do the things we do as a Christian people come from? What stories rest behind things like hymns, traditional prayers, or even what in other traditions we might call the ‘smells and bells’ of worship?”

So, I am starting to look deeper into things like the nature of the music we sing. A few years back I picked up a book by Richard Mouw and Mark Noll entitled “Wonderful Words of Life: Hymns in American Protestant History & Theology” (Wm B. Eerdmans Publishing Co, 2004). Sadly, I have not taken the time to read it through. I picked up the book, found it fascinating, started to read it, and became distracted by work matters. I lost track of my progress in the book during the reappointment which was the distracting event, but as there is sincere interest in how our hymns came to influence our worship, I have finally begun to take the necessary time required to properly digest the book.

In the first chapter, which is entitled “The Defining Role of Hymns in Early Evangelicalism,” Mark Noll begins by sharing the contents of a letter from 1731 which was written by Philip Doddridge to Isaac Watts. Writing on the events of a midweek service, Doddridge shared how tears were shed over a hymn written by Watts entitled “Give Me the Wings of Faith to Rise.” According to “Wonderful Words of Life,” Doddridge wrote “I had the satisfaction to observe tears in the eyes of several of the auditory, and after the service was over, some of them told me that they were not able to sing, so deeply were their minds affected with it.”

According to Noll, the key to the power of hymns was that “Ordinary believers had begun to find their voice, and that voice was expressed in song” (p. 4). I find this interesting because of a number of characteristics and generalizations that I have heard and sometimes agreed with about hymns.

First, hymns are theology heavy. Theology, if you go deep enough into the etymology, is “an account or discussion of the divine.” Coming forward through time, theology ties itself into concepts like a philosophical study of the divine or the scientific study of how the divine interacts with humanity, but all ties back to a basic concept. Theology is essentially an account (or a collection of differing accounts) of how the divine relates to humanity.

When I say that hymns are theologically heavy, they speak a lot about concepts of the relationship between humanity and the divine. Let’s look at the hymn by Isaac Watts which we have already mentioned. One verse of “Give me the Wings of Faith to Rise” states: “We ask them whence their victory came: they, with united breath, ascribe their conquest to the Lamb, their triumph to his death.”

In this verse we see references to the conquest of the Lamb of God, imagery used heavily in the Book of Revelation. Revelation 5 reveals the Lamb of God and is filled with praise for God. Revelation 5:9-10 states: “You are worthy to take the scroll and to open its seals, for you were slaughtered nad by your blood you ransomed for God saints from every tribe and language and people and nation; you have made them to be a kingdom and priests serving our God, and they will reign on earth.” Watts’ verse ties heavily into the concepts of Revelation and especially into concepts like those in these verses of scripture.

These concepts are deep concepts tied into a deep reading of scripture. The lamb of God is referenced many times in scripture and by tying in the conception of Jesus as the lamb of God, the hymn ties into that legacy and modality of scripture. The richness of theology in just a few lines shows in many way exactly how deep hymns can be in their expression of conceptions of how God relates to humanity.

Second, hymns move quickly over concepts which are very rich. Let me connect this idea with a concept in enjoying food, which I know will be a huge surprise to people who know me or this blog. I recently had the pleasure of sharing my first piece of Limburger cheese with my wife. Limburger has a bad reputation. I found the cheese to be aromatic, if not outright pungent. The taste was complex and required a slow enjoyment to get all of the flavors and notes out of the cheese. Enjoying the Limburger took time, slowness, and the desire to enjoy something I have heard disparaged most of my life.

In my opinion, it would be nearly criminal to take a big piece of Limburger, shove it in your mouth, and swallow it down with a big gulp of something to mask the flavor. If you were to do that, I would hope that the food police would come and give you a citation for doing something in poor taste… Why, yes, that was a dry and terrible pun. 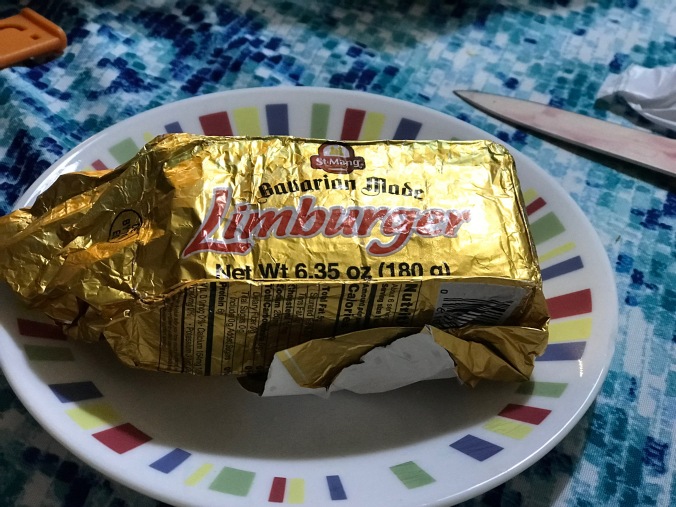 I will happily accept free samples of other Limburger brands… I’m shameless when it comes to tasty cheese!

Hymns are full of flavor like a fine cheese. They have richness and depth which cannot be rushed. It is hard to miss the depth of a praise chorus where a single line might be repeated forty times in a single worship service, but if you blink you might miss some of the depth found in one of the hymns.

This depth makes sense when you consider the context of a lot of these hymns. Families might own a Bible if they were fortunate, but the hymns they might sing came out of a hymnal which was often printed and shared with folks on a regular basis. In an age before radio and television, they might sing hymns after dinner, sing hymns at the midweek prayer service, and sing hymns on Sunday. While our hymnals live in the church and are often opened only on Sunday morning, the hymnals of the time which Mark Noll writes about were hymnals that were used often. Even if folks did not own a hymnal or could not read it, through regular repetition the deep theology would be shared and taught in deep rooted ways. Even the least literate church members would learn their faith through slow enjoyment of something which was sung regularly and deeply.

Third, hymns were methods of education. We’ve already touched on the how these hymns taught deep concepts. What I am trying to express here is that these hymns were intentionally designed as tools to educate folks about more than just theological ideas. Hymns were sung and tied into the Christian year in ways that mutually assisted teaching about the Christian year. Every spring the church would sing songs of Lenten concepts and then resurrection. Every winter the church would sing songs of Advent and Christmas. The concepts taught in the church tied into the concepts sung by church members. Together they would educate folks about the Christian year in a mutually beneficial way until it became second nature.

What’s interesting in all of this is Mark Noll’s conception. Hymns took off in popularity because they gave voice to ordinary believers and helped them to express their beliefs through song. Strangely enough, one of the criticisms I hear most about hymns is that they are not accessible to ordinary people. Their language is often filled with strange terms, their pace is too fast, and they are sung to sheet music, which is often something only accessible to people who have had access to an education with music as an emphasis. In many ways, the original strength of hymns is now the challenge.

When the most popular praise songs can be heard on Christian radio twice an hour and we might sing the same hymns two or three times a year, hymns lose their ability to be the songs of the people. So, why do we stick with hymns? Perhaps it is stubbornness, but I tend to believe it is because there are those who still enjoy the depth, the legacy, and the history of hymns. Perhaps, with time, we will find ways to instill hymns back into the regular life of the church. Until then, perhaps they should be appreciated as what they remain—a connection to a vibrant and deep past.

This site uses Akismet to reduce spam. Learn how your comment data is processed.