As previously stated, one of the blessings of the Academy for Spiritual Formation is that it is located at the Malvern Retreat House. Our stay while at the Retreat House is at the Family Life Center. There are wonderful walking paths near the Retreat House for contemplative walks. One of the paths includes a set of fifteen Stations of the Cross. Yes, I said fifteen. It is a unique set of Stations.

We were invited to consider kataphatic contemplation while at the last session of the Academy. Kataphatic contemplation uses works of art or bits of nature as invitations to contemplate the divine. I was drawn to the fifteen (yes fifteen) stations of the cross which were created by the artist Timothy Schmaltz. They are quite beautiful and have been rather interesting to ponder.

Last week’s reflection was on the first station of the cross entitled “Jesus is Condemned.” The post ended up reflecting on how we all must choose how to react to Jesus. 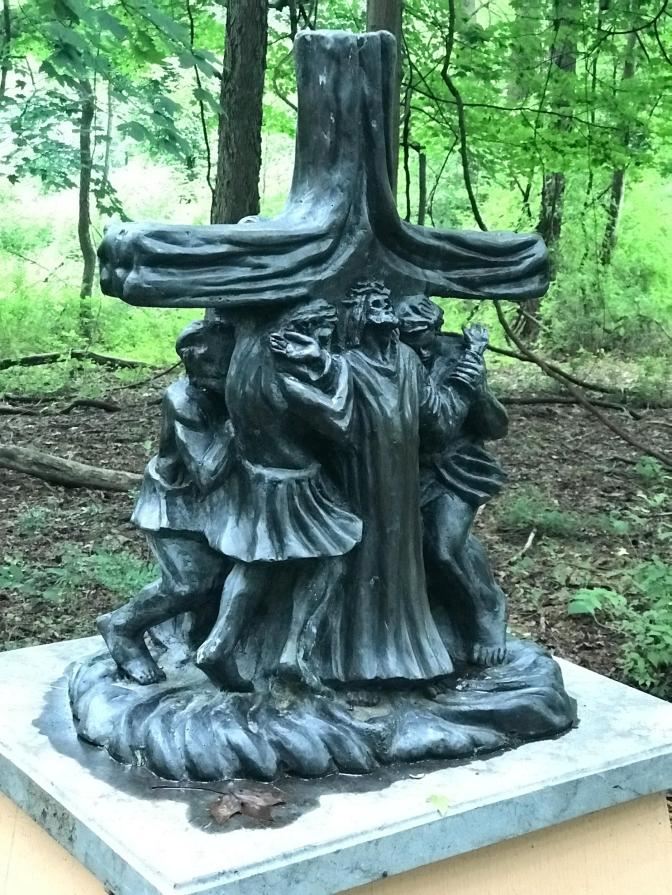 “Christ takes up His cross” by Timothy Schmaltz

This week’s image is entitled “Christ takes up His cross” and was dedicated to a gentleman named Bob Ashman. As previously stated, the four stages of contemplation that I am using for this particular exercise are as follows:

As I show up with this piece of art, I find myself drawn to the imagery of the Roman soldiers surrounding Jesus. The soldiers are strong and burly men. Jesus’ arms are being lifted up to hold the bottom of the beam which will eventually be attached to his wrists. They seem strong. Jesus seems to need help raising his hands to the beam. Jesus is looking up towards heaven. If I stood in front of the piece, Jesus would be staring right at me. When I was at Malvern, those eyes seemed a bit haunting to me. Here is the beginning of Jesus’ last journey before his death. It is an emotional image.

As I slow down I start to think about what I am seeing in this sculpture. I look to details like the strong muscles on the soldiers, the slighter appearance of Jesus, and it makes me begin to feel a bit perturbed. I notice a detail that tells me a great deal about the story which is untold in image, but familiar to those who have studied the stories.

In fact, if a person were to isolate one scripture as the basis of this scene in this scenario, it would likely be the Matthew or Mark passages. Why? In the Matthew passage, Jesus receives the crown of thorns after Pilate’s judgment and before he goes on the journey to the cross. John has Jesus don the crown of thorn before Pilate concludes his questioning.

Mark and Matthew are both filled with events which take place between these two stations. In Mark, here’s how verses it reads in chapter 15, verses 16-20: (Common English Bible)

“The soldiers led Jesus away into the courtyard of the palace known as the governor’s headquarters, and they called together the whole company of soldiers. They dressed him up in a purple robe and twisted together a crown of thorns and put it on him. They saluted him, ‘Hey! King of the Jews!’ Again and again, they struck his head with a stick. They spit on him and knelt before him to honor him. When they finished mocking him, they stripped him of the purple robe and put his own clothes back on him. Then they led him out to crucify him.”

The detail of the crown tells me that Jesus has had a hard journey between stations. In all honesty, these actions are the kind of actions that make me want to do anything but watch a passion play. The taunting, the sorrow, the pain, and the brutality of it. To hit someone in the head with a crown made with thorns or even spiky leaves (there is a controversy here which I am not going to wade into), is to do something incredibly brutal. As I slow down and let my knowledge parse what I see, I am brought into a deep place in my heart.

As a Protestant, I have this strong idea in my head of Jesus as victor. When I think of Jesus I think of the teacher and the miraculous rabbi. I imagine Jesus calming a storm or confronting legion. I do not tend to focus on these moments. “Let’s rush to the resurrection! Let’s even rush to the tomb.” This place of pain in the life of Jesus is uncomfortable. Even as I write this blog I want to do anything but dwell in this place where Jesus arms, the arms of the Good Shepherd, are raised up to hold a cross that will soon cause him to stumble and fall.

As I decide what I will stay with as I go forward, my mind is drawn to a scripture that I read earlier in this week as a part of my personal devotions. 2 Peter 1:3-8 says: (CEB)

“By his divine power the Lord has given us everything we need for life and godliness through the knowledge of the one who called us by his own honor and glory. Through his honor and glory he has given us his precious and wonderful promises, that you may share the divine nature and escape from the world’s immorality that sinful craving produces.

This is why you must make every effort to add moral excellence to your faith; and to moral excellence, knowledge; and to knowledge, self-control; and to self-control, endurance; and to endurance, godliness; and to godliness, affection for others; and to affection for others, love. If all these are yours and they are growing in you, they’ll keep you from becoming inactive and unfruitful in the knowledge of our Lord Jesus Christ.”

There is a very large part of me what wants to dwell in this image and find a place of sorrow to dwell within forever. Peter’s letter invites me to see things differently though. Jesus has given us everything we need for life and godliness. We are invited to share in life through Jesus.

As Jesus looks upon me, even in weakness, there is still a question of how I will respond. Will I find a reason for shame or an invitation to faith? If I have that faith and put it into practice, might the eyes carry an invitation if I add to my faith this alternative conception of what Paul might call the“fruit of the Spirit?” What would the eyes say if I were to let these things grow in me? What would the eyes say if I were transformed by this act of love?

This journey of contemplation is just beginning. Next week the third station will be posted on Saturday. I invite you to journey and ponder along as we head through these fifteen opportunities for contemplation.

This site uses Akismet to reduce spam. Learn how your comment data is processed.